Happy New Year! Okay, not quite yet. I’m not ready for Christmas to be over and I even have a few gifts left to give, but I wanted to share this festive New Year’s Eve Party Hat Cake in time for you to make one for your New Year’s celebrations. I don’t normally do much for New Year’s, but this year I’m heading up to New York City to spend it with one of my best friends. We won’t be ringing in the New Year in Times Square (not a fan of crowds or freezing my butt off), but I’m sure we’ll have fun catching up.

I had big plans for this cake. Bigger than the cake turned out to be, in fact. I was originally going to put two party hats on top, using two different style ice cream cones, but I ultimately decided the cake was not big enough to use both, so I kept it simple with the traditional cone shaped party hat, and plenty of sprinkles. The cake itself is a vanilla cake from Liv for Cake, with a tangy Meyer lemon cream from Food52 and fresh raspberries inside. The frosting is an American buttercream from Martha Stewart. I thought this was a nice, bright flavor combination, perfect to start off a fresh new year. 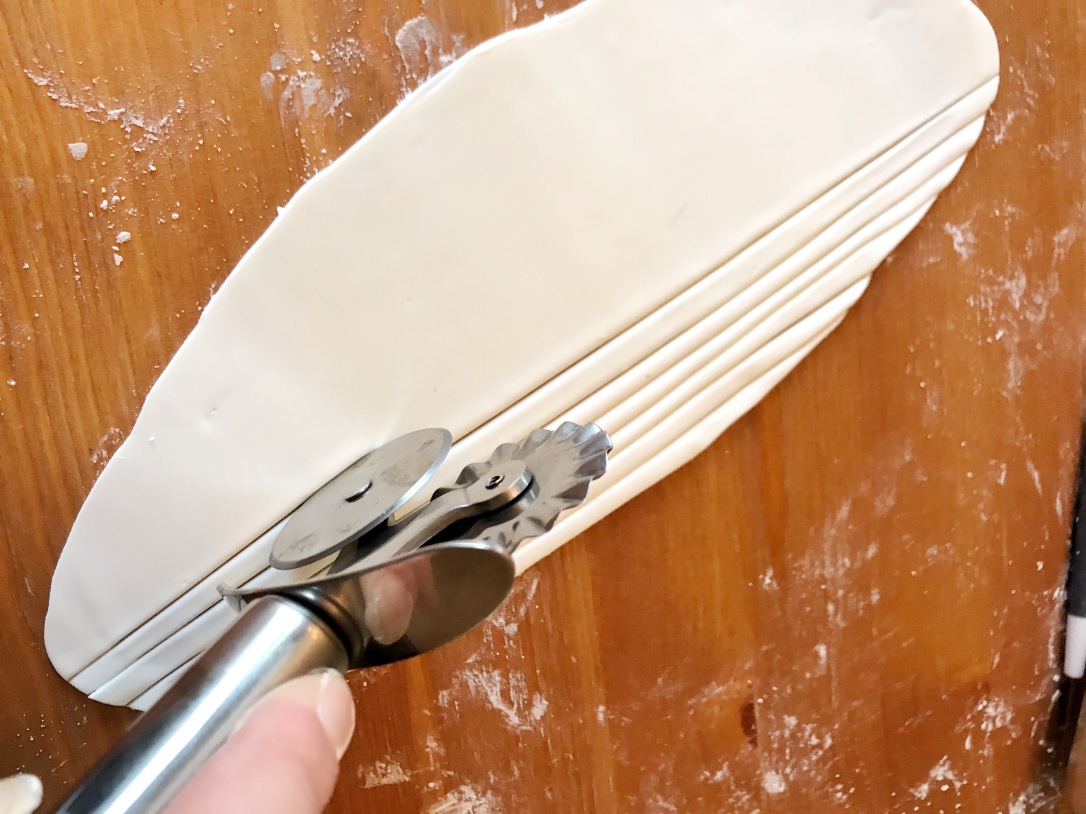 Before I started assembling my cake, I wanted to cut out the fondant pieces that would become the metallic fringes around the base of the party hat. I did not do this in advance, so I wanted to do it before anything else, so the pieces would at least have a chance to dry a little bit. You could do this step a few days prior to give them even more time to dry. I rolled out my fondant fairly thin, and then used a rolling pastry cutter to cut it into strips, then I cut across the other way so that I had a lot of little rectangles. 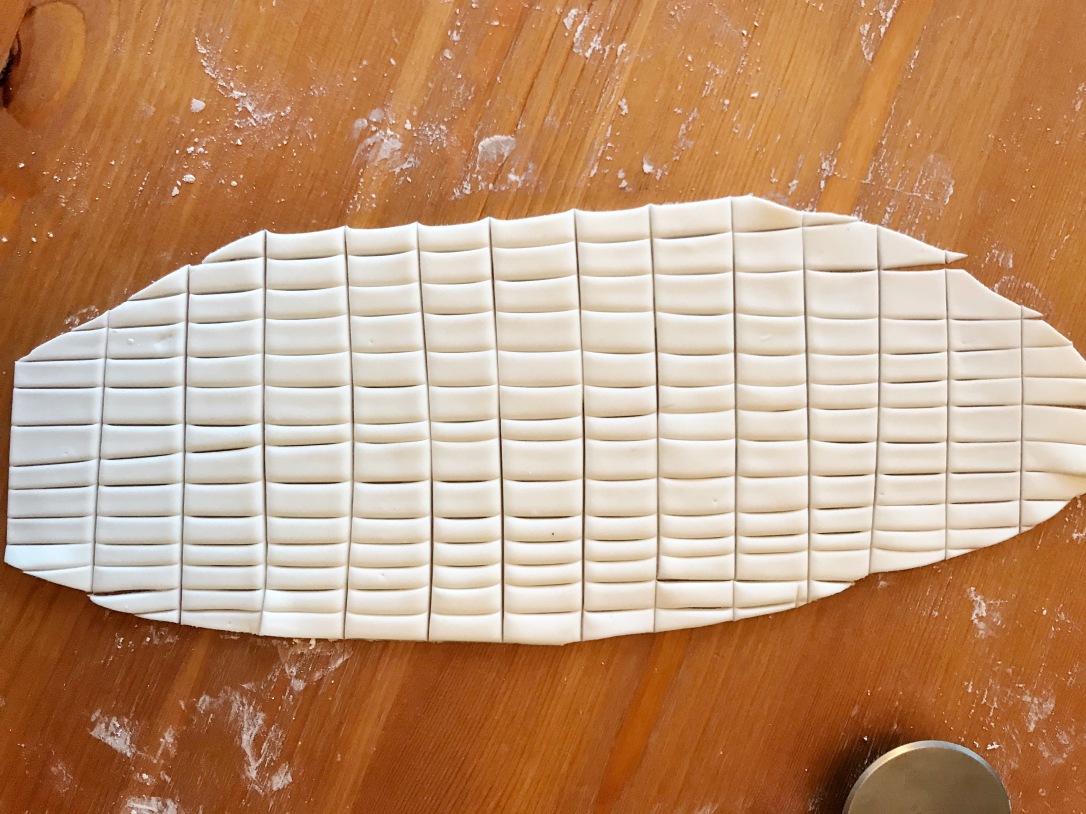 I actually ended up with too many, but that’s better than not having enough, right? Once you have your rectangles cut, you want to pick them up and pinch them into what I’m calling seagull shapes. Set these aside on a piece of parchment paper while you assemble your cake.

After stacking and filling the cake, I did a quick crumb coat with the buttercream, and stuck it in the fridge to chill. I then took the remaining buttercream and added 2 ounces of Wilton sprinkles, one pack of gold and white sprinkles, and one pack of silver and white sprinkles. These were in the Christmas baking section of Michael’s and were 70% off. Score! You want to gently fold the sprinkles in, so you don’t break them up. Mixing the sprinkles into the frosting, instead of applying to the cake after frosting, gives a nice embedded look, where the sprinkles will be flush with the outside of the cake.

Once I had the sprinkles mixed in thoroughly, I did my final coat with an offset spatula and a bench scraper to smooth. Now, when your smoothing your frosting, the sprinkles will sometimes catch on your scraper and drag, creating little dents and dings in your frosting. You can fill these back in and smooth again until you’re happy with it. I don’t think it needs to be perfect here anyway, but if you use a lighter touch with the bench scraper, that helps prevent too much dragging. I chose to leave my top edge rough and highlight it with gold, but you could smooth it out if you’re not a fan of the perfectly imperfect.

After I was happy with my final frosting coating, I popped the cake back in the fridge while working on the party hat. First, I used some leftover frosting to coat the ice cream cone and then that went in the fridge as well to firm up just a bit while I cut out my fondant numbers for the 2019 on the hat. I have a set of alphabet and number cutters I purchased at Walmart a few years back. Mine are about 1 inch high and fit pretty well on my cone.

I put the numbers onto my frosted ice cream cone, then I rolled the cone in black sanding sugar. You need to be a little bit careful doing this, especially around the numbers. I sprinkled and patted them in around the numbers instead of rolling that part. Once your cone is coated thoroughly, you can ever so gently lift it up and place it on top of your cake.

This is a bit tricky and you will get some black sanding sugar on the top of your cake, but as long as your cake is chilled, you can get the sugar off. I used a slightly dampened Q-tip and just touched it to the grains of sugar and was able to lift them off.

Next, I piped some frosting around the base of the cone, it will not want to stick to your sanding sugar so you’ll have to play around with it. It doesn’t have to look pretty because at this point, you’re going to start covering it with your fringe.

Put your fringe pieces on, making sure they point in different directions and cover all of the frosting you just applied. Now back in the fridge to chill it up again.

Once it’s had a little time to firm up again, you can start painting. I used Sweet Sticks Edible Art Paint in Honey Gold.

This product is great because you can use it straight from the bottle, no need to mix it with anything. Using a paint brush, I just painted it carefully onto my fringe, my 2019 numbers, and used it to highlight the rough edge around the top of the cake. You may need to take breaks so that you can firm it up in the fridge again if the frosting is getting too soft to paint. 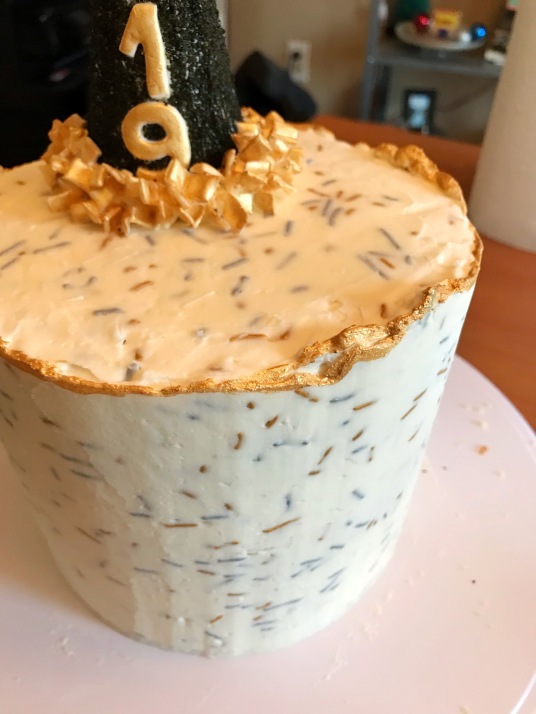 Now, at this point, you could call it quits, and it would be perfect just the way it is, but, if you can get your hands on some 24 karat edible gold leaf, you can take it to the next level. I had two small squares of it leftover. It comes in tiny pieces of folded up paper.

If you fold back one side, just a bit, so you don’t get the whole square at once, you can press it lightly to your cake surface and then use a dry brush to pat it down onto the cake. This is a process that takes some getting used to, but it is something anyone can do. I chose to let mine curve out from the party hat and then down one side, but you can do whatever looks good to you.