I am lucky enough to be a part of a lovely and supportive baking group on Facebook. It’s a small group, but one where everyone is willing to share information and help whenever possible, and my fellow members often inspire me to go above and beyond my initial ideas. Which is definitely what led to the creation of this cake. My first thought was simply to try to recreate the taste of a Thai Iced Tea; the slight hint of vanilla in the otherwise simple black tea, and the sweet creaminess of the sweetened condensed milk. And of course I was going to try to make it look like a Thai Iced Tea.

As I was planning, however, I was also seeing other people’s creations in the group and I was inspired by their out-of-the-box thinking to go beyond that basic flavor profile and incorporate some more complex flavors. Thinking of Thai desserts, I first thought coconut sticky rice and mango, but I was worried about the texture of the rice in between the layers of cake. I knew I could find a mango spread, but it took some brainstorming, googling, and daydreaming to come up with a plan for representing the coconut sticky rice. Eventually my thought process led me to rice pudding, and then the thought that perhaps rice pudding cake is a thing. Turns out it is, but most of them weren’t really what I was looking for. Then, I stumbled upon a German blog, Bake to the Roots, which featured a rice pudding cake that rested on a crumb crust, sort of like a cheesecake. The recipe uses gelatin and whipped cream to stabilize and lighten the rice pudding. I decided I could adapt this to serve my purpose, replacing the rice with Thai Jasmine rice, and the milk with coconut milk. I left off the crust, so that I could use the rice pudding cake as a layer of filling between my cake layers. I also made it in a 4 inch springform pan, and baked my cakes in 6 inch cake pans so that I the rice pudding cake would be smaller in circumference. I added Thai tea to my cakes, my sweetened condensed milk buttercream, and my white chocolate ganache dam, which is another little tip I learned in my baking group.

When it came to decorating this cake, I wanted to keep it simple, but effective. I wanted you to take one look at it, and know what it was supposed to be, but didn’t want to hit you over the head with it. So, after stacking and filling, I covered the cake in Thai tea condensed milk buttercream, some left white, and some colored with orange and a bit of brown food coloring. I applied this buttercream exactly the same way I did the Shamrock Shake cake. I popped the cake in the fridge to chill overnight, then made some gelatin ice cubes. For the ice cubes, I used the recipe for Knox Blox on the back of the gelatin box, but instead of juice, I used water, to keep it colorless and clear. I halved the recipe and poured it into a small, rectangular glass food storage container, about 5 inches by 7 inches, and refrigerated that overnight as well.

The next morning I cut the gelatin into cubes and dried each cube carefully so that no water would get onto the cake. I re-purposed a bubble tea straw I had washed carefully, and stuck it into my cake. Then I took some leftover vanilla American buttercream, and melted it in the microwave until thin enough to pour, but not hot enough to melt the buttercream already on the cake. I wrapped the top of the cake in acetate and taped it so that the acetate fit tightly against the sides of the cake. Then I poured the melted buttercream on top of the cake and spread it with a rubber spatula. Before the buttercream could harden, I started placing my gelatin ice cubes, and stuck the whole thing back in the fridge for about 15 minutes. If I did this again, I would leave it longer, as when I pulled my acetate off, it pulled a bit of buttercream with it, but I was able to smooth that down afterwards. 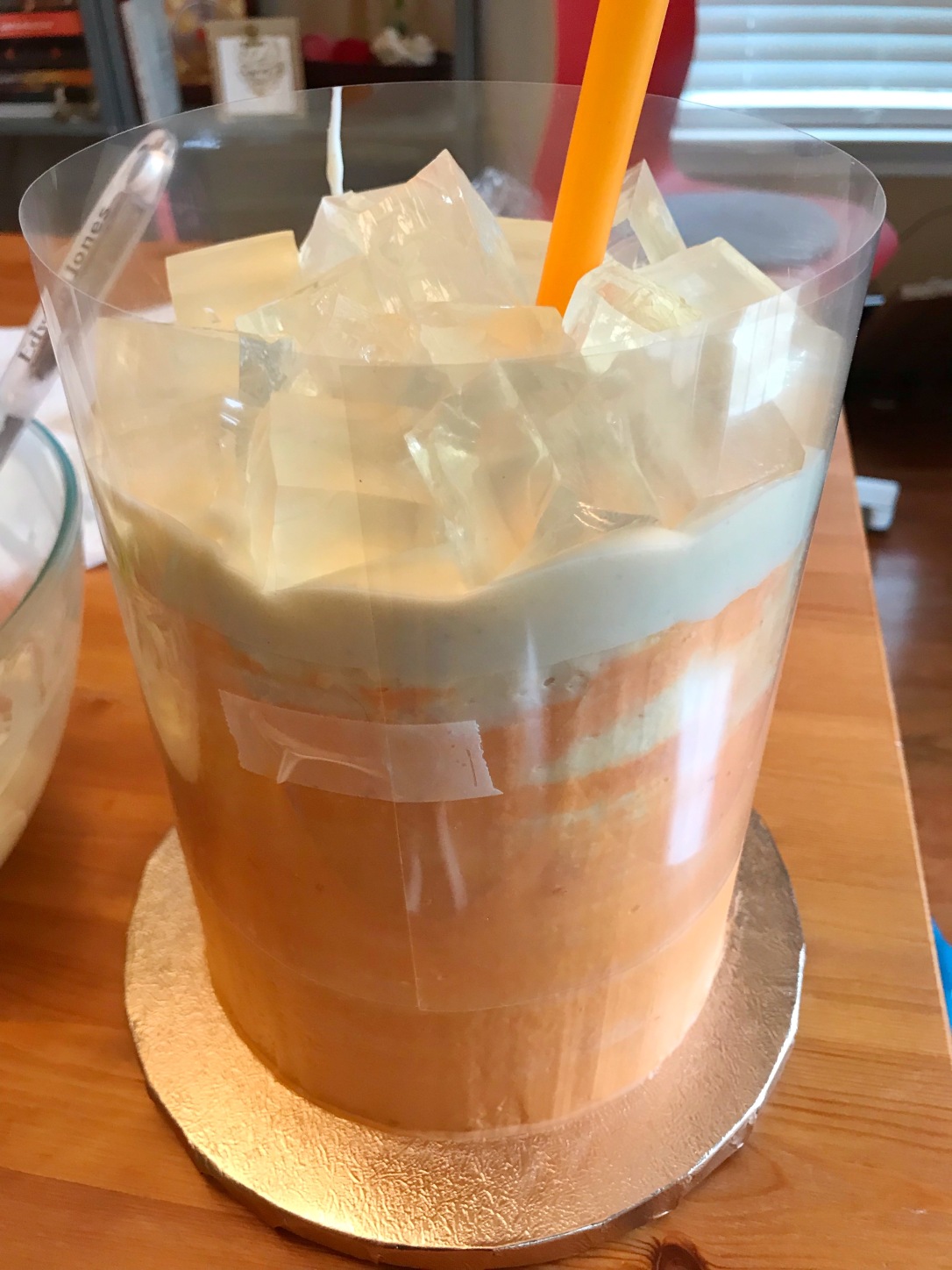 I was very nervous about how the texture of the rice pudding cake would work with the texture of the cake, but I felt like it could work, and, not to pat myself on the back, but I was totally right. Getting a bite that including the tart mango spread, the sweet buttercream, the tender cake crumb, and the creamy coconut rice pudding cake, was like a crazy cool party in my mouth. Like the kind of party I’m usually not cool enough to attend. The kind the cops usually have to shut down.

Now, I am not a recipe writer, but I realize that this cake is a little more complicated because of all my changes, so I want to give a bit more information than just links to the recipes I used. Instead, I’ll give you links, and a brief synopsis of the changes I made, in what I hope is an organized fashion.

Adjustments: Cut recipe in half – Did not make crust – Replaced rice with Thai Jasmine Rice – Replaced milk with full fat canned coconut milk – Left out orange blossom water – Left out berries – Divided between two 4 inch springform pan, but only used one of these in the cake

That is one lengthy explanation! If anyone has any questions about recreating this cake, please let me know in the comments!