The image of a forest always has a sense of wonderment attached to it. Countless stories from fairy tales to great literary works are set in the woods because of the magic there. It’s a place that can be both delightful and spooky, and I wanted to bring a little bit of each of those elements to my woodland cakescape.

I used a recipe from The Scran Line for the cake roll, brushed it with Amoretti toasted marshmallow syrup, and filled it with a Ding Dong Cake filling (ermine buttercream). Then I started out by trying to make a wood grain buttercream wrap using a wood grain painter’s tool. I have done this successfully before, but for some reason this time the wood grain just didn’t show through. So after wrapping the cake, I used a clay carving tool to carve some wood grain lines in, let it firm up in the fridge, and then filled in with the darker brown buttercream. Then I just scrape, scrape, scraped until the grain showed through. Problem solved. 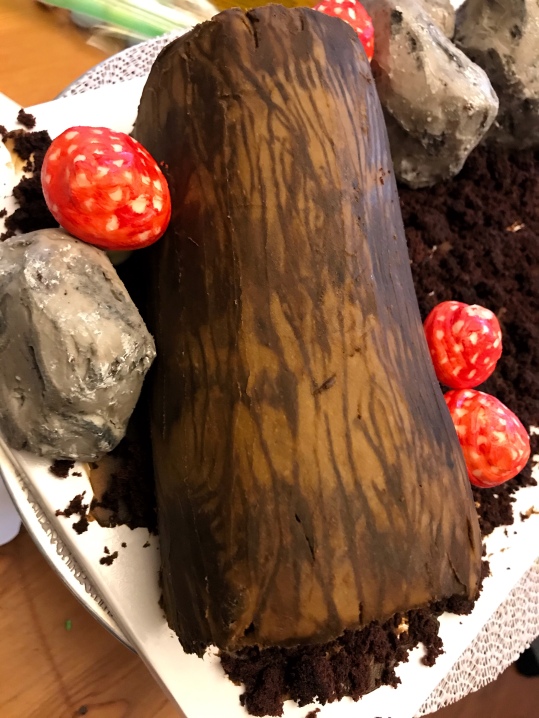 My rocks are hunks of cake carved into rock-like shapes and coated with gray buttercream. After they firmed up in the fridge, I lightly dabbed on some white and black edible paint to give them more dimension.

The little red mushrooms are also from The Scran Line and are just piped buttercream frozen and then pieced together. I painted mine with a mixture of petal dust and vodka, instead of using red buttercream. 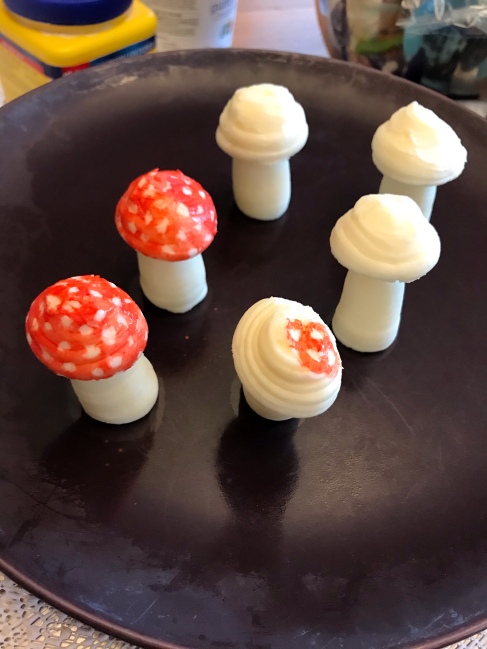 Of course this is where things went sideways because, as always, I got too caught up in what I was doing and forgot to keep taking progress pictures, so you’ll have to accept my descriptions only. I cut blades of grass from wafer paper and painted them front and back with vodka and gel color, and set them aside to dry. I crumbled up chocolate cake scraps from my rock carving to make dirt. And I microwaved some cake batter dyed green to make moss. I assembled this all on my cake board, and then melted some isomalt to make my spider webs.

For the spider webs, I draped a SilPat over a roll of paper towel to create a downward curve, then I stuck a butter knife in my melted isomalt and used it to drizzle the isomalt onto the SilPat, first in vertical lines, and then horizontally across my vertical lines to make a web. After the webs cooled I had to carefully peel them up and gently break off the gloopy bits. Then I arranged them on the cake. 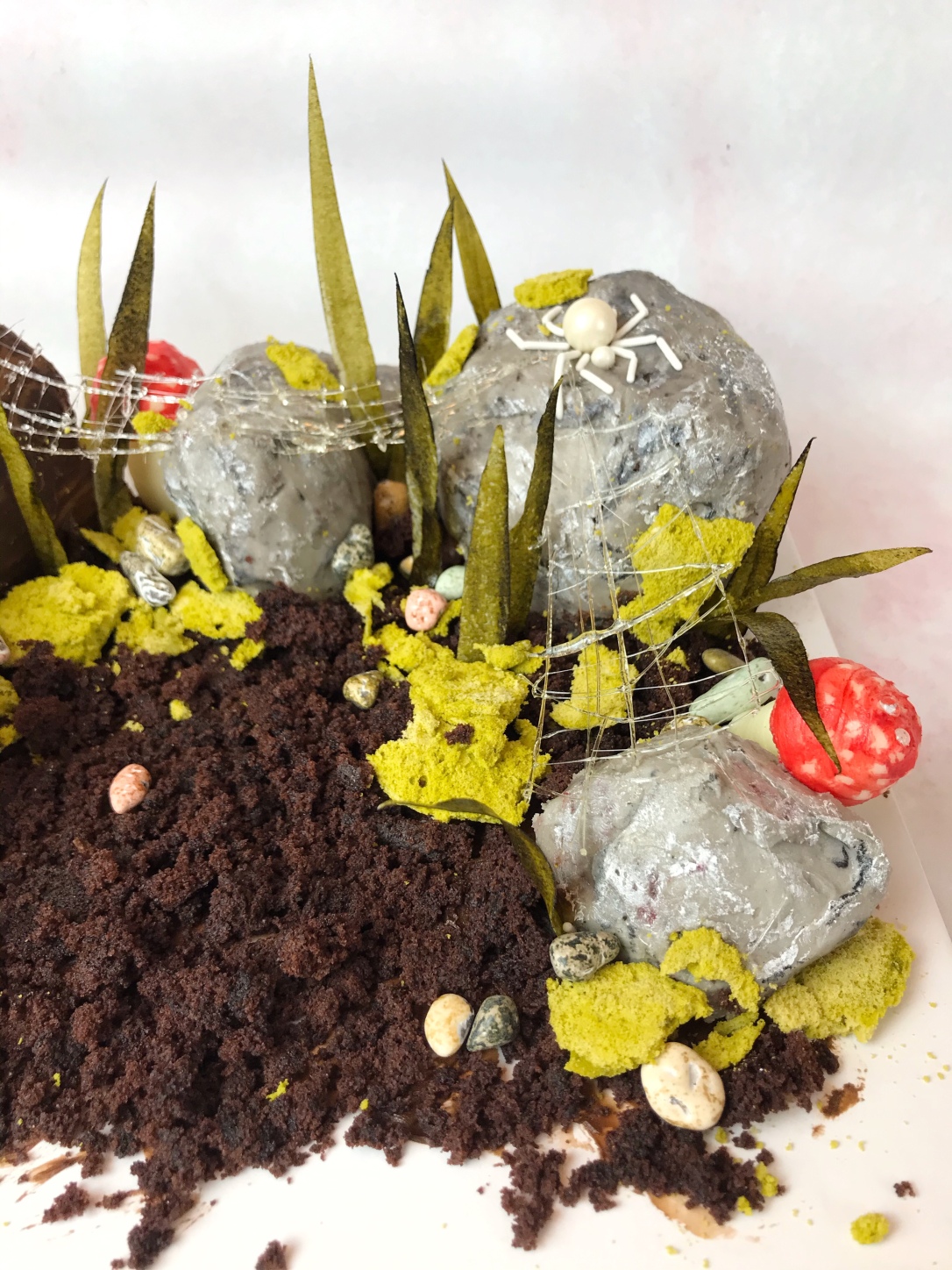 The spider is make out of sprinkles, a trick I learned from my friend Charra, @charrajf. It took a bit of time and patience, but I managed to get the sprinkles in place without too much swearing. My attempt at a sprinkle dragon fly was a bit easier, but not quite as effective. I gave him some isomalt wings. I also took a few isomalt drips and placed them on the mushrooms for a dew drop look, and scattered some chocolate rocks around my forest floor. 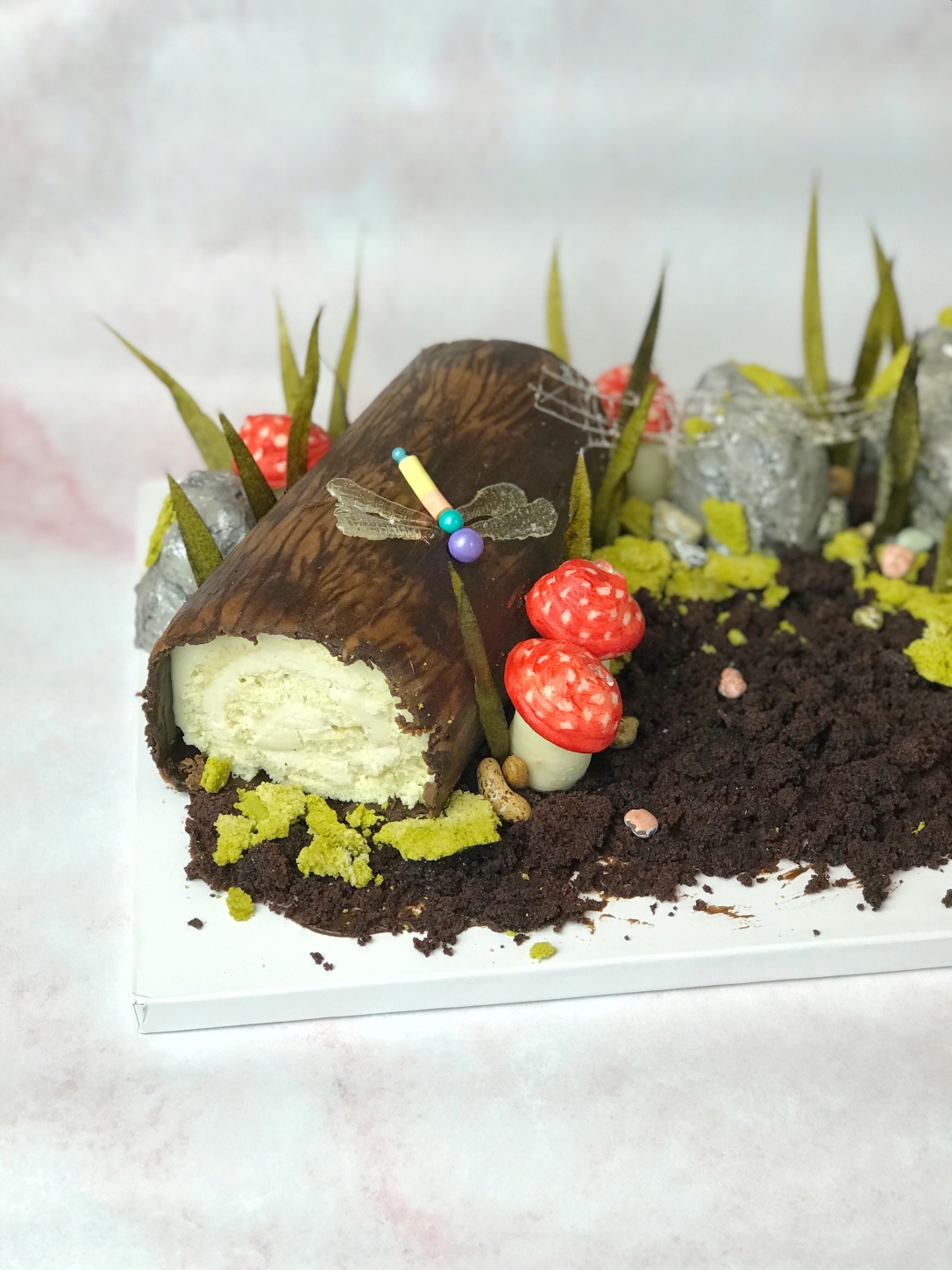 So that, my friends, is the story of my little woodland cakescape. Let me know what you think or if you have any questions. Also accepting short short stories on what this spider and dragon fly are up to.